What Happened in April?

April was a challenging month for equities as stocks declined. US growth stocks were amongst the worst performers (-13.6%), followed by US large-caps (- 8.8%) and US small-caps (-7.8%). Bonds also struggled as investment grade corporates were down 6.7%, 7-10 year US Treasuries fell 4.2%, and high yield credits declined 4.2%. Commodities produced mixed returns as crude oil and broad-based commodities rose (+4.1% and +3.9%, respectively) while gold and silver fell (-2.1% and -8.0%, respectively).

As inflation is running at its fastest pace in over 40 years, the Federal Reserve has indicated that it may be more aggressive with its rate hiking cycle. During a panel at the International Monetary Fund’s spring meeting on Thursday, April 14th, Federal Reserve Chairman Jerome Powell stated, “I would say that 50 basis points will be on the table for the May meeting.” This would double the quarter percentage point increase that was implemented at the March FOMC meeting, and strays from the historical 25 basis point increases seen during the Fed’s tightening cycle from 2004 through 2006. The rationale for the Fed to move more quickly is related to much higher inflation than previous cycles, an overly hot labor market, the urgency to restore price stability, and no longer depending on supply chain recovery which has been further complicated by the Russia-Ukraine conflict. Many market participants are now pricing in 50 basis point rate hikes in all of the May, June, and July meetings, and project the Fed Funds Rate to be 2.75% at the end of 2022.

According to Bespoke Investment Group, the AAII Bullish Sentiment indicator is currently at a 30-year low (see chart below). Only 16% of those surveyed were bullish, which is below the historical average of 38%. This suggests that investor views on the market may be growing increasingly bearish.

On Tuesday, April 24th, the yield on 10-year US Treasury note exceeded 3% for the first time since January 2014 and approximately doubled since the start of the year. Aside from setting prices for financial instruments globally, this benchmark yield has further implications, such as more expensive loans and mortgages for consumers which can in turn decrease spending. Also, corporations will face higher debt costs which may pose a challenge for companies within sectors that hold more debt, for instance, those in the technology sector. With increased debt costs, such companies will have reduced capacity to invest and return to shareholders, making them less attractive to investors. Although heightened yields may spark fear in investors accustomed to years of low rates and warranted high stock valuations, many believe yield increases above 3% will not have material economic consequences as consumers are less exposed to debt relative to previous expansions.

As of Friday, April 29th, 55% of companies within the S&P 500 have reported Q1 2022 earnings. 80% of these companies have beat their estimates, which tops the 5-year average of 77%. The energy sector has the highest earnings growth rate for the quarter (254%), followed by materials (43%) and industrials (32%). As a percentage, the industrials sector leads in companies with reported earnings that exceeded estimates, followed by Consumer Staples and Health Care. Additionally, the index is currently reporting earnings growth of only 7.1%, and if it remains near this level, it will mark the lowest earnings growth rate since Q4 of 2020. Given extraordinary earnings growth in 2021 due to the post COVID-19 economic recovery, earnings in 2022 are likely to be relatively lower. Moreover, companies are likely to face headwinds this year resulting from potential future interest rate hikes.

More Volatility on the Way?

Amongst a quicker tightening cycle, war with Russia and Ukraine, and renewed Covid lockdowns in China, the market has experienced heightened levels of volatility throughout 2022. As seen in the chart below, there have been major swings in the S&P 500 Index which is down 13% since the start of the year. The CBOE Volatility Index (VIX), known as the fear gauge for the market, surpassed a level of 35 in March and breached 30 in the past week. The index remains elevated, possibly signaling more volatility ahead.

We are Still in the Early Stages of this Inflation Cycle

As the March PPI (Producer Price Index) reading marked the biggest gain in history and the March CPI (Consumer Price Index) hit a 40-year record high, inflation remains stubbornly high. Our view is that the single biggest portfolio construction debate in 2022 is the concept of where you want to be on the duration curve. Do you want to own short duration assets or long duration assets? In our opinion, investor portfolios are still underweight inflationary sectors and asset classes. We see many portfolios that remain tilted towards growth/technology and long duration assets which could continue to struggle as interest rates potentially rise further. 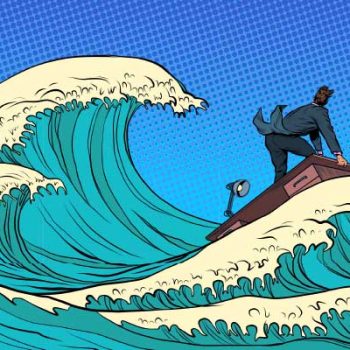